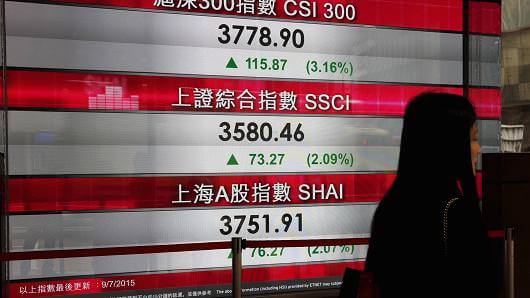 Recent times haven’t been easy for China’s economy. Growth has declined each year with the latest GDP figures estimated at below 7% annually.

As is the case for practically every slowdown, bank stocks and manufacturers are among two sectors that have suffered most from China’s economic fallout.

Yet that doesn’t mean all investments in China will perform badly in the future. It doesn’t even mean the stock market rout was 100% deserved.

The first few economic shocks came as a big surprise to some investors. As such, psychological effects almost certainly have amplified existing concerns.

China Bank Stocks in the Backstage

A robust economy demands strong financial institutions serving as its backbone. However, our stock picks today aren’t Chinese banks themselves.

We’re instead talking about the players behind them.

Two companies stand out most among the China stock market’s “behind the scenes players”. Operating largely in the background, they work hand-in-hand to form a strong team. Each of them plays a crucial role within the nation’s financial sector.

Julong would be the brawn if the two companies mentioned above are the brain and brawn of a two-man team.

Julong’s product lines include sorters, banknote strapping machines, currency counters, along with other self-service machines. Meanwhile, their customer base ranges from domestic banks to brokerage firms and other institutions.

Julong stock is currently being sold at 7.91 CNY, a shadow of its former price that once peaked at 56.30.

Not the biggest company in the banking industry yet one of the best, Julong boasts impressive financial performance and sound fundamentals alike. Their operating metrics are the highest in its entire sector.

Julong has 30.44% return on average equity. That’s a whole 8% higher than the firm’s nearest competitor.

One major contributor to Jurong’s leading ROI is a net profit margin of 32.59%. Unsurprisingly, that’s also the industry’s best.

The reason GRG is titled “the brain” in this tag team combo is because of its main product line. GRG specializes in system software related to many of the banking sector’s machines.

But despite a fall in share prices, GRG is still the industry’s second biggest player in terms of market capitalization and performing better than most.

With extremely high returns of over 20%, resulting from high profit margins of more than 25%, GRG is definitely one of the strongest performers in the financial institution service provider market right now.

The opening of the Hong Kong-Shanghai Stock Connect allows individual foreign investors to easily buy shares in mainland China for the first time.

Because of this, a brokerage account in Hong Kong is now more useful than ever. It can give you access to all companies listed on the Shanghai Stock Exchange including Julong and GRG.

Want to buy stocks in China? You might be interested in our analysis of Daqin Railway too. It’s the country’s largest transporter of coal and other resources.