The latest indicators shed light on worsening conditions for the Indian economy. Consumer confidence in the world’s second most populous nation fell during the past four months with no signs of stopping.

In fact, India’s lowest consumer confidence reached the lowest level in history according to a report from MNI Indicators. The group is an agency which produces monthly reports exploring the attitudes, perspectives, and confidence across different regions.

India’s consumers across regions and cities were surveyed and the result was not positive. With consumer confidence the lowest on record, respondents reported further deterioration in their personal finances and a gloomy outlook on the business environment’s future.

The MNI India Consumer Sentiment Indicator revealed that there were more optimists than pessimists overall, but it might not stay that way for long. This is due to a sharp decline  with the indicator falling to just below 110 – a record low when compared to 133 in 2012. 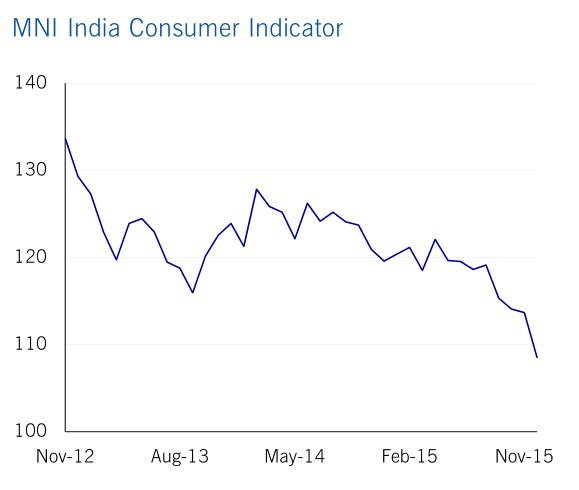 As illustrated by the graph from MNI above, sentiment has been on a downward trend since the start of 2014. This is especially worrisome because of two reasons. First, it kept falling despite aggressive actions from the central bank to boost the Indian economy.

The report found that consumers’ perception of the current and expected business situation in India were at their worst ever. The indicator is below 100 for the first time, showing the number of pessimists about the Indian economy outweigh optimists.

Furthermore, the current outlook on business conditions will most stay. According to the report, consumers expect future conditions will be slightly better than they are now. But this indicator also fell to the lowest level in the survey’s history.

A main reason consumers are less confident is because of poor economic development since the Modi government’s election in 2014. This questions the verity of the strength in India’s latest GDP figures.

Indian consumers feel they’re in for the worst year yet regarding their financial situation at home. Sentiment toward both current and expected personal finances are at their lowest recorded levels.

The current personal finances indicator is a measurement of whether a household is better or worse off financially than a year ago. The downward trend began in 2014.

Expectations for the future are no better than current sentiment, with expected personal finances at a record low as well. Two of the main reasons behind the gloomy outlook are higher household expenses and worse employment conditions.

Falling for the fourth consecutive month, Indian consumers’ outlook on employment also hit a record low. Employment outlook tends to fall in the second half of the year. The rate it fell and the new record it set are both alarming though.

However, with all that said, InvestAsian is still bullish on the Indian economy over the long term because of its solid demographics and strong growth. The country has potential which your average local consumer probably doesn’t see.