Buying a Condo in Bangkok: The Ultimate Guide 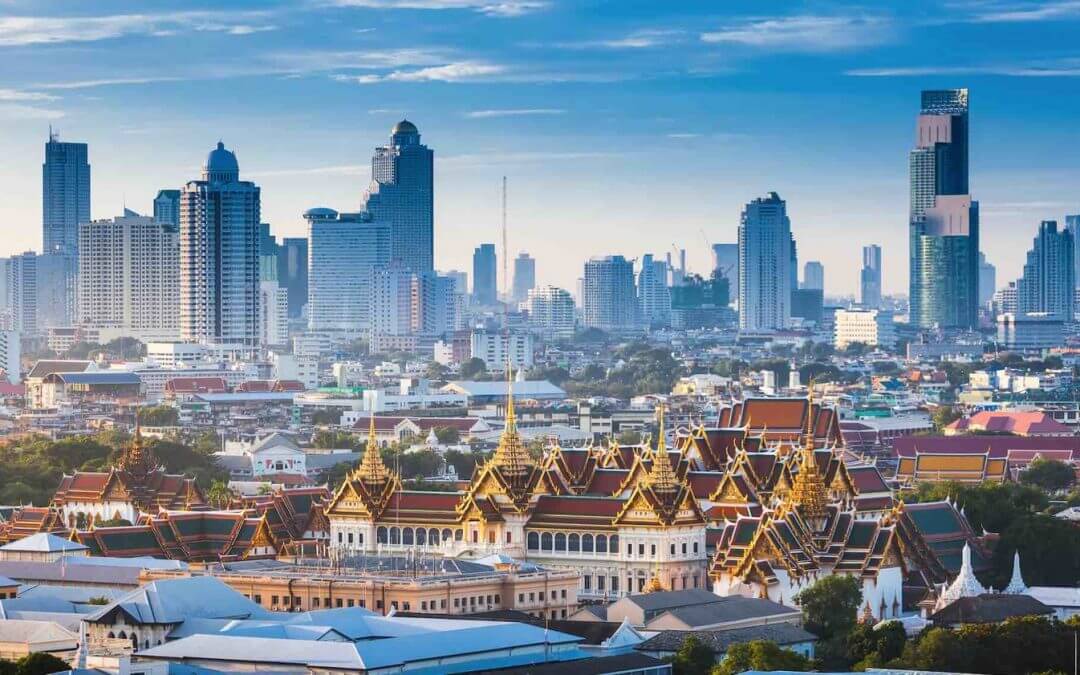 As a rapidly developing city with a rising real estate market, Bangkok is becoming a popular place to invest in foreign real estate.

Buying a condo in Bangkok, however, isn’t always easy. Bangkok is a huge city with numerous areas to live in. Choosing realtors and developers can thus be difficult with so many options.

You’ll also need to be aware of certain legal and regulatory obligations to avoid hassle from the authorities.

Overall, buying a condo in Bangkok exemplifies how too much choice can be a double-edged sword. In this city, you won’t ever be short on condo options, but you might feel overwhelmed at times with the number of options on the table.

That’s why I created this guide to buying a condo in Bangkok. In this guide, we’ll address:

For the purposes of this guide, we’re going to focus primarily on buying condos – not landed houses or commercial real estate. That’s because foreigners are only allowed to buy condos in Thailand. 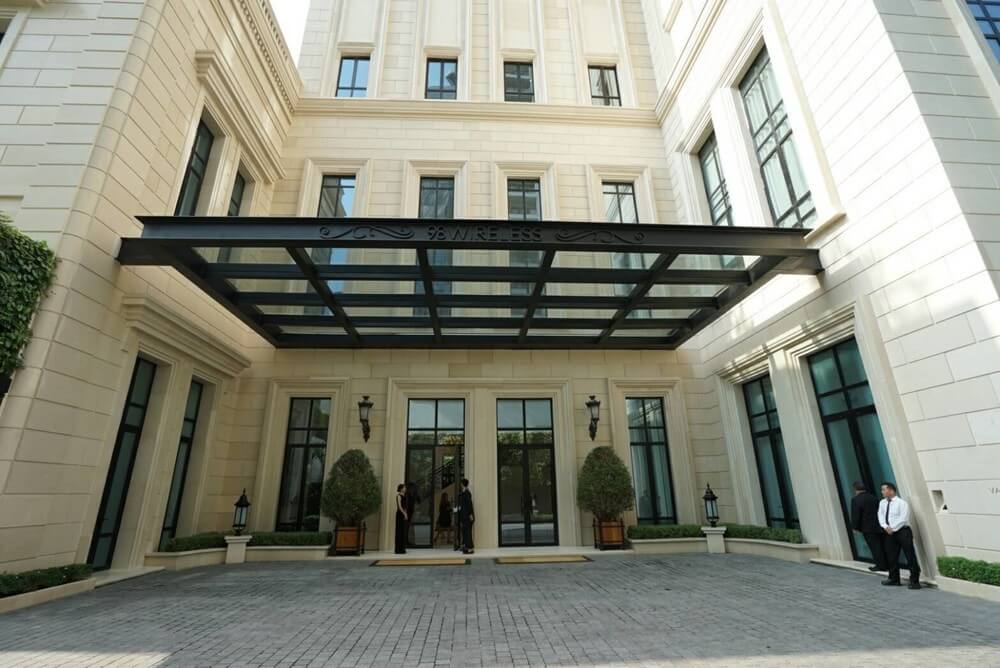 Why Buy a Condo in Bangkok?

Thanks to the country’s role as a trade, business, and transit hub in Southeast Asia for many centuries, Thailand’s property market has grown steadily for the past few decades – especially in its capital, Bangkok.

Buying real estate in Bangkok is becoming increasingly popular for several reasons. First off, Thailand’s fairly strong economy and growing middle class makes it an excellent place to do business.

It’s just an hour flight away from rapidly growing Asian frontier markets such as Cambodia and Vietnam too. That makes Thailand a great hub to invest in high-growth Asian economies.

Bangkok in itself is also a vibrant, diverse, and exciting city of 18 million people. Throughout the Thai capital, you’ll find bustling traditional markets, awe-inspiring traditional architecture, glamorous supermalls, and plenty of nightlife.

Lastly, Bangkok’s real estate market is steadily growing. If you plan on leasing your condo, then you can earn rental yields exceeding 5% in the right areas. That’s on top of capital appreciation potential, of course.

Unlike some of its neighbors, Thailand isn’t particularly open to foreign investors. For instance, if you aren’t either a US or Thai citizen, you can just own up to 49% of a company as a foreigner in Thailand.

Likewise, foreign property ownership in Thailand is subject to similar ownership regulations and restrictions. In most areas, foreigners may only own above-ground condos in buildings with no more than 49% foreign ownership.

You also must deal with paperwork and bureaucracy when buying a condo in Thailand. Luckily, you’ll probably deal with government officials who are used to working with foreigners when you buy real estate in Bangkok.

A notable rule is that you must send the money for your condo to Thailand in terms of foreign currency in order for the condo to be in your name. In other words, the foreign currency must be sent to a Thai bank and they must do the currency conversion into Thai baht.

Once you’ve gotten through the initial bureaucracy, you’ll be in fairly good shape though. Real estate ownership laws in Thailand are quite strong and the government uses a computerized record system to track titles and other important documents.

How Much Does a Bangkok Condo Cost?

With so many condo options in Bangkok, you’ll find that prices can range tremendously. They vary based on the size, location, and amenities of the condo that you’re interested in buying.

Naturally, condos in high-demand prime areas like Lumpini or Silom are going to cost far more than suburban districts. Amenities like pools or cleaning services will also cost extra. 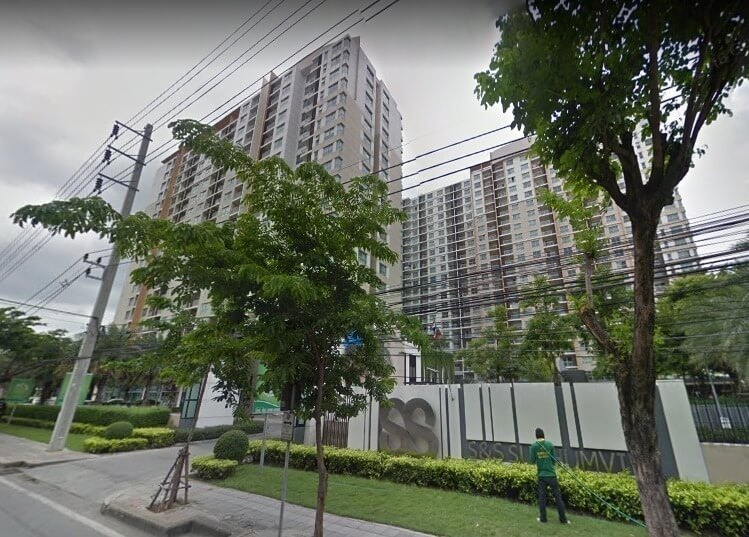 Not everywhere in Bangkok is absurdly expensive. You can buy a condo at S&S Sukhumvit, in a suburban yet fast-growing and convenient area, for just 70,000 baht (~US$2,500) per square meter.

Perhaps the most daunting question when buying a condo in Bangkok is, “where should I buy it?”

Bangkok is a massive city with plenty of neighborhoods. And each neighborhood has its own charms, benefits, and downsides. Where you decide to buy a condo in Bangkok will ultimately depend on your needs, price range, and personal preferences.

The following section will therefore tell you about some of the best neighborhoods in Bangkok as well as some of the pros and cons of living in each one.

Sukhumvit is a large, vibrant district just southeast of Bangkok’s city center that surrounds its namesake, Sukhumvit Road. Since this district is so diverse, property prices can range widely depending on where and what you buy.

A high-end, new development close to the city center might set you back substantially whereas an older development in a more local area could be surprisingly affordable.

This rather small district is located at the very heart of Bangkok’s city center just southwest of Sukhumvit along Silom Road. As a major hub for business, Silom/Sathorn is home to plenty of wealthy Thais, expats, and visitors 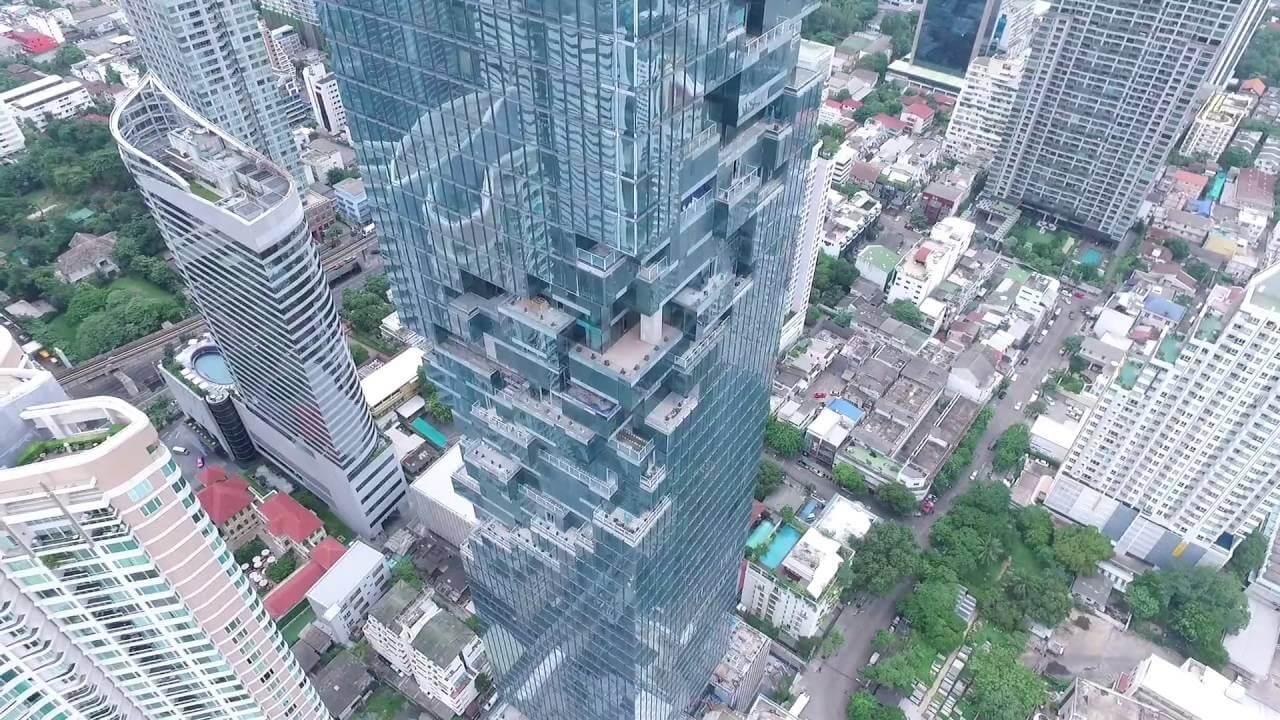 Mahanakorn, one of Bangkok’s tallest buildings and home to the Ritz Carlton Residences, is located in Silom district.

Located in the city center between Silom and Siam, Lumpini is one of Bangkok’s most exclusive – and expensive – districts to live in.

This area is named after Lumpini Park, an oasis among Bangkok’s hustle and bustle that was created by King Rama IV as a gift to the citizens of Bangkok.

Lumpini is also home to plenty of high-end shopping centers and many embassies on Wireless Road. That makes the Lumpini area remarkably safe.

It’s also just a quick BTS or Grab ride away from practically all attractions in Bangkok, including major sights in Sukhumvit, Ratchathewi, and Silom.

If you’re looking to live in the city center for a reasonable price, head to Ratchathewi. This well-connected neighborhood has plenty of public transit and even a direct rail link to the airport. It’s also home to Victory Monument and the massive King Power Duty Free Mall.

Despite this district’s convenient location, you’ll find a wider variety of condo options and more reasonable prices than in places like Silom or Lumpini. Some of the top hospitals in Bangkok are located in Ratchathewi district too. 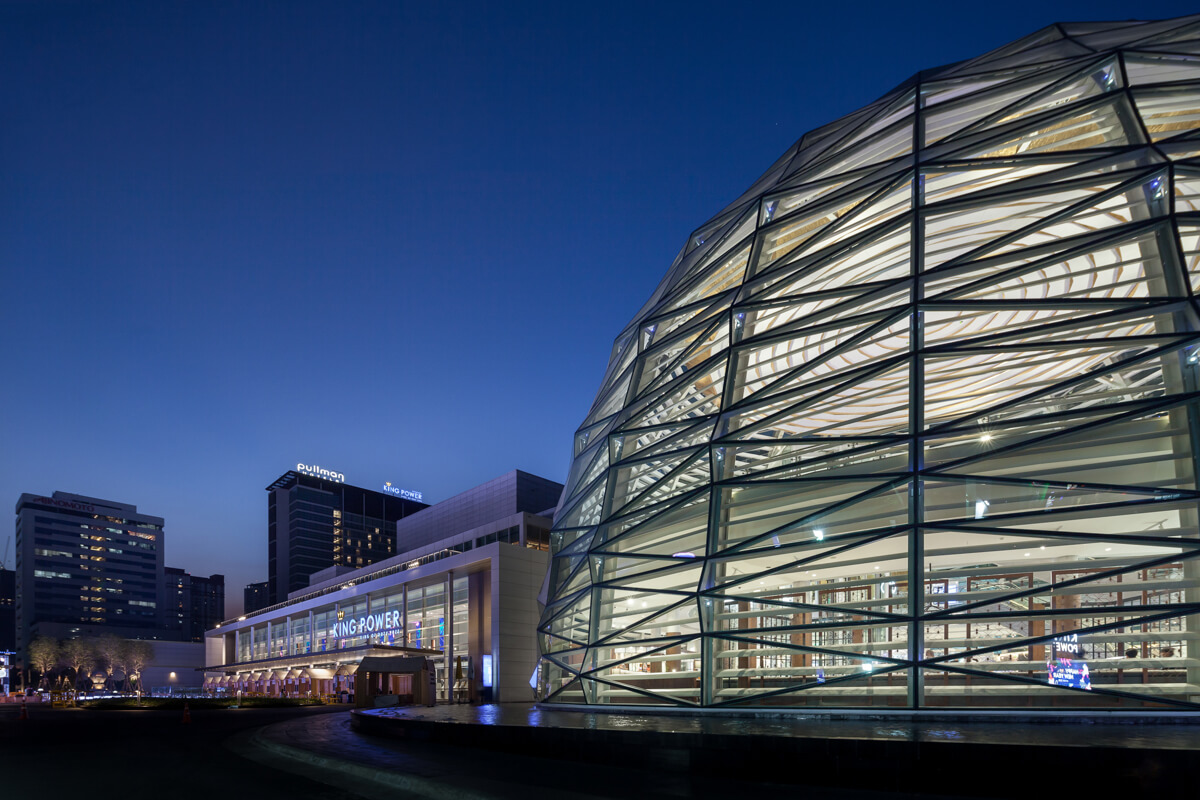 Last but not least, Bangkok’s Riverside district is another popular area for expats, retirees, and second home owners to buy condos in.

Situated along the Chao Phraya River, this district is being revitalized by high-end developers looking to take advantage of the stunning views it offers.

On the Riverside, you can find a wide range of condos from luxurious units to great entry-level condos. Especially if you look on both sides of the river.

You also have plenty of location options from quiet, local areas to high-end developments. This district might also be a good buy if you’re interested in reselling since it’s developing so quickly.

Overall, property taxes and fees in Thailand are very low.

Thailand does not charge an annual property tax, but you nonetheless must pay a few taxes and fees when buying your new condo in Bangkok.

First, there’s a 2% property transfer fee that you must typically pay half of.  And you may also be liable to pay a 0.5% stamp duty (if the seller doesn’t pay it – normally they’re supposed to).

Additionally, if you sell the condo within five years after purchasing it, you may need to pay a 3.3% “specific business tax.”

Rental income taxes in Thailand are also relatively low, and you can take plenty of deductions to lower them even further. Most landlords only pay roughly 5%, if that.

However, one fee you must be aware of doesn’t come from the government, but from your condo building. Many condos will require you to pay a management fee that covers building upkeep, staff, and other amenities.

This exact fee will depend on the building that you choose, along with its density and quality standards. Expect to pay around 500 baht per square meter of space annually though 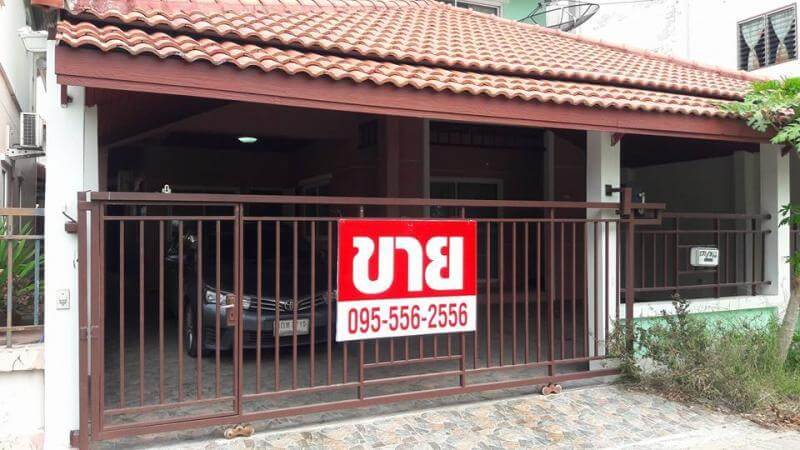 Despite what most English advertisements might tell you, Thai real estate agents are mostly a service geared toward foreigners. Locals generally sell their properties through word of mouth, online forums, or simply hang a sign outside their building.

Bangkok’s real estate market is booming. Therefore, the sheer variety of options means that it can be difficult to choose a high-quality property developer or agent to help you find your ideal condo in Bangkok.

Talking about developers, you’ll want to choose one with a solid reputation and a few major projects under their belt. While some smaller companies can work, it’s usually venturing into dangerous territory. So you should stick to more established developers as a general rule.

Some of the biggest names in the property development game in Bangkok include Ananda, Major Development, and Sansiri. You can find a more comprehensive list of the best condo developers in Bangkok here.

But as a foreigner, a real estate agent can be a great source of information and can help you with issues like translation and negotiation. You should consider consulting a Thai lawyer directly for issues relating to transfer of ownership though.

It’s unlikely that you’ll find a great deal through a Thai real estate agent. Regardless, they’ll help make the process easier – especially if you’re a foreigner and a newcomer.

Finally, you may want to hire an independent property inspector to examine the condo before your purchase is finalized. This can help determine whether the condo is up to your standards and help get issues resolved more expediently by the developer.