Why You Shouldn’t Buy Japan Property

I’ve held a fascination with Japan, its culture, and food since a very young age. Each year, I visit the country to enjoy its remarkable efficiency, famous hospitality, and relax a bit.

Tokyo is one of my favorite places to “escape from the third world”. The sheer chaos of frontier markets is exhilarating – the investment opportunities moreso still. But even I sometimes need a break from developing Asia.

With that said, I would never buy property or invest too much money in Japan despite my love for the country. Three huge problems would make me avoid investing there – perhaps minus a few stocks that have their own individual merits.

The reasons why you should not invest in Japan are rooted in three facts of life in the country. Namely, the Japanese mentality toward real estate investment, poor demographics, along with regional tensions in East Asia.

Property in Japan isn’t an Asset

Real estate is considered an investment in most places. Assuming that you take good care of a house or apartment building, it should last indefinitely and appreciate in value along the way.

That isn’t the case in Japan though.

Whereas some of the most desirable pieces of real estate are over a century old in the western world, it’s the opposite in Japan. Property is typically assumed to have a useful life of between only 20 and 30 years.

That’s the harsh reality of a nation prone to earthquakes, tsunamis, and destructive wars for as long as anyone alive now can remember.

It’s beaten into the psyche of a people where families historically owned a generational plot of land, and when older family members passed away, all structures on it were razed and rebuilt.

To be fair, it’s mostly true that property in Japan won’t last long.

Repairs can usually be made and the Japanese do enjoy some of the world’s best earthquake resistant buildings. However, repairing aged structures is costly. Even the best homes will have damage after a few 8.0 earthquakes.

And if the tsunamis, quakes, and nuclear meltdowns don’t eventually get your assets, a “crazy neighbor” next door might.

You probably already know Japan faces a demographic crisis. Sadly, their citizens’ average age is older than anywhere else on the planet.

Combine that with a falling population, along with implications for workforce productivity and greater public spending on health/pensions. It’s easy to imagine why Japan will almost certainly have a rough few decades. 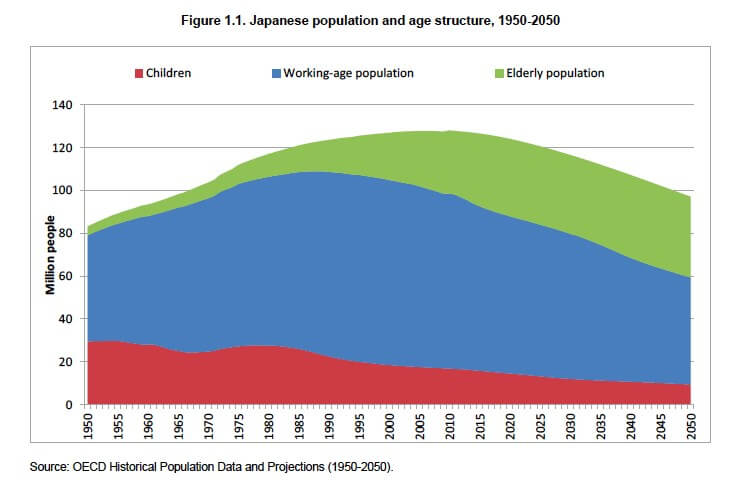 Japan’s population will fall by over 20% in the next three decades alone. It’ll look even worse by the end of this century.

By 2050, Japan’s population won’t just decline to under 100 million. The percentage of retirees will rise dramatically too. Tackling both these factors at once will prove challenging.

You can already see rural Japanese towns practically vanishing off the map. 8.2 million homes across Japan are now unoccupied. Meanwhile, Japan’s population decline will only make these problems worse until housing oversupply even plagues major cities like Tokyo and Osaka.

Japan (and really East Asia in general) have enjoyed relative peace and stability since the end of World War 2. Nations in the region were far more concerned with economic growth, rebuilding themselves, and/or consolidating control over their citizens.

The situation is more tense today. Back in 2011, the Chinese economy finally surpassed Japan’s to become the world’s second largest. Many decades of rapid growth currently allows China to directly compete with Japan both economically and militarily.

China’s buildup of armed forces and greater assertiveness is forcing its historic rival towards a once unthinkable decision. Specifically, Japan is taking the first steps of reactivating its military for the first time in generations.

I’m not screaming doom or saying war is coming. However, ancient rivalries and geography are two things which don’t usually change.

Investors should be aware that history often repeats itself. A continued rise in tensions may, at the very least, cause greater economic uncertainty. At worst, they could possibly wreak havoc on Japan’s financial markets.

Do you agree with this article? Either way, there are tons of markets with better fundamentals than Japan out there. Consider investing in one of them instead.