Since Myanmar opened up to the world and denounced its military dictatorship, the nation has benefited from increased trade and an exponential increase in foreign direct investment.

That’s true for practically all industries in Myanmar… and the Yangon property market certainly isn’t an exception.

Earlier this decade, real estate values in Myanmar’s former capital city skyrocketed as demand outstripped supply. A main cause of rising prices were dozens of foreign businesses expanding into Yangon. Of course, that would naturally boost demand for office space.

However, local property developers didn’t see all this coming. A lack of quality office space led to a massive surge in prices. In fact, Yangon is currently among the most expensive cities in the world to lease prime commercial real estate.

Why is the Yangon Property Market Weak?

Real estate buyers who entered the market five or ten years ago are happy with their decision to invest in Myanmar. Yet potential investors are thinking twice before they enter the “golden land”.

There are several reasons, but they can be boiled down to two – an unpredictable real estate market from a lack of political stability, and a large number of locals who feel discouraged to make property purchases.

Political issues played an important role in the Yangon real estate market which led to a halt in the property boom. Thus, analysts are watching what the government led by Nobel Peace Prize winner Aung San Suu Kyi will do.

The managing director of Colliers International in Myanmar, for his part, is optimistic about the property market. According to him, the effect from the nation’s politics played out as predicted and didn’t really come as a surprise to anyone. He’s probably biased though. 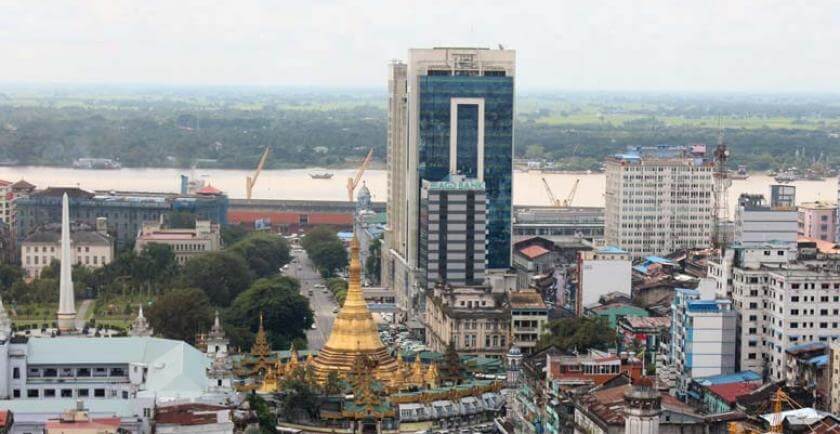 Despite ranking among Asia’s least developed nations, commercial property prices in Myanmar are among the region’s most expensive.

Nobody is Buying Real Estate in Yangon

First, the living standards in Myanmar are still not great – quite poor, actually. This hinders the property market. Especially when foreigners rank living standards among the most important factors when looking for a new country to live in.

Strict regulations stop easy ownership of property in Myanmar, and there’s also a distinct lack of modern infrastructure. Much of Yangon still uses infrastructure that the British left – roads, railways, power and water supply dating back more than 50 years.

Secondly, buyers can never be sure of their purchases. This applies especially to both ongoing and future projects. Myanmar banks lack capitalization due to an outdated financial system.

As such, banks are frequently unable to give loans to property developers. Smaller developers must finance their own construction with advances they receive from unit sales.

What’s the danger from all this? Construction halted in some cases when developers failed to meet their sales targets. These projects were indefinitely stalled or cancelled afterwards.

Even though Myanmar “opened up”, they still must bring their real estate sector up to regional standards. Investors are currently better off buying property in frontier markets like Cambodia and Vietnam.