Countries that foreign investors don’t often consider are usually some of the best ones to buy real estate. Armenia certainly qualifies as an overlooked property market.

This landlocked nation bridging Asia and Europe probably isn’t the first place you’d think about when purchasing real estate abroad. Yet a combination of low prices and strong growth, along with a recent political shift, bodes well for Armenia’s economic future.

It helps that real estate prices in its capital city of Yerevan are just barely US$1,000 per square meter. That’s considered a global “floor”, thus home values in Armenia have few places left to go besides upwards.

There are plenty of reasons why you should consider investing in Armenia other than the mere fact that it’s cheap though. Let’s discover more about this unusual property market located at the crossroads of Asia.

Why is Armenia Property a Unique Investment?

Corruption has surely been Armenia’s greatest obstacle towards economic development over the past several decades. Rankings including the Ease of Doing Business Index and Corruption Perceptions Index consistently score Armenia as among the lowest in the region.

However, the Velvet Revolution in 2018 and a new administration could lead to some much-needed political reform in the country. Nothing is certain – but Armenians living in the country and outside seem generally positive when asked about their nation’s future prospects.

Armenia’s currency, the Dram, is also showing remarkable resilience. Other currencies in the region including the Turkish Lira and Georgian Lari have collapsed since the start of 2019. But the Armenian Dram is one of the rare currencies which have risen against the US Dollar.

Part of that is due to Armenia’s massive diaspora, many who are returning to their homeland following recent positive sentiment regarding the country’s future. This is noticeably increasing the demand for Armenia’s local currency.

Three million people live in Armenia. However, an estimated 11 million Armenians live outside the country – especially in Russia and the United States. 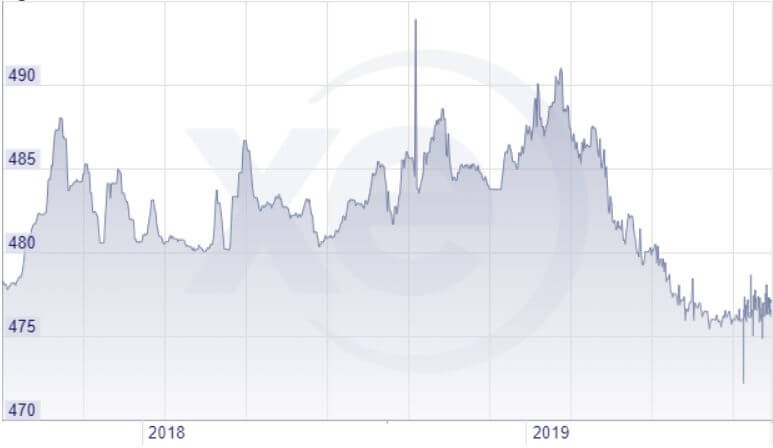 A two year chart of the Armenian Dram compared to the US Dollar. Note the Dram’s steady increase since the beginning of 2019.

Our global economy is more interconnected than ever. And property prices in a major city can only reach a certain “bottom” before foreign investors start buying up assets, inevitably leading toward rising values.

Right now, you can purchase prime real estate in Yerevan’s centrally located Mashtots district for under US$1,000 per square meter. Such values are practically unheard of anywhere.

The number of capital cities where property prices remain at US$1,000 per sqm are so few that you could count them on both hands. One of these is Cambodia, which we’re actively involved in through the Khmer Ventures fund.

Another is in Armenia’s neighbor, Georgia, which is becoming increasingly difficult if you’re a foreign investor. Most of the remaining ones are in much less developed nations like Pakistan, Bangladesh, and Tunisia.

In summary: Yerevan is the economic, cultural, and political center of Armenia. We think that, because of various factors stated further above, Armenia property values will almost certainly rise from $1,000 per square meter.

But Armenia Has Problems Too

Nowhere is perfect and all investments have their risks. Therefore, despite its solid potential overall, Armenia has its own problems that are worth mentioning. Most of these issues would fall under the category of geopolitical risk.

Quite frankly, Armenia is surrounded by enemies. Turkey was responsible for the Armenian genocide and these two countries still have poor relations. Meanwhile, on the eastern border, Azerbaijan and Armenia are technically still at war over the Nagorno-Karabakh region.

Armenia is a landlocked country as well. Lack of access to the ocean gives any nation a huge disadvantage in terms of trade, cutting it off from sea routes which hurts Armenia’s potential to become a major exporter.