E-commerce in Southeast Asia lags noticeably behind the rest of the continent.

Despite an increased focus from the authorities, it’ll be quite some time before e-commerce in ASEAN reaches the same level of other places in the region.

A vast majority of Southeast Asian nations are performing badly in terms of their e-commerce industries, according to a report from CIMB Bank’s research institute.

For the sake of easier comparison, only the ASEAN 6 (Vietnam, Indonesia, Philippines, Malaysia, Singapore, and Thailand) receive a mention in this article. That’s because the other 4 countries of Cambodia, Laos, Myanmar, and Brunei barely have any e-commerce to speak of.

The e-commerce retail markets in those six mostly-developing nations are worth an estimated US$7 billion. Nonetheless, that figure still compares rather poorly considering Southeast Asia’s massive population of over 700 million consumers and growing.

With only 29% of people in ASEAN having access to the internet, Southeast Asia’s e-commerce growth potential is enormous. Furthermore, of the 29%, research shows that consumers shop equally often compared to those in developed countries like Japan and the United States.

InvestAsian has categorized the barriers to e-commerce into two distinct categories: real and perceived challenges. The real challenges directly cause the perceived ones, thus we’ll go over them first. 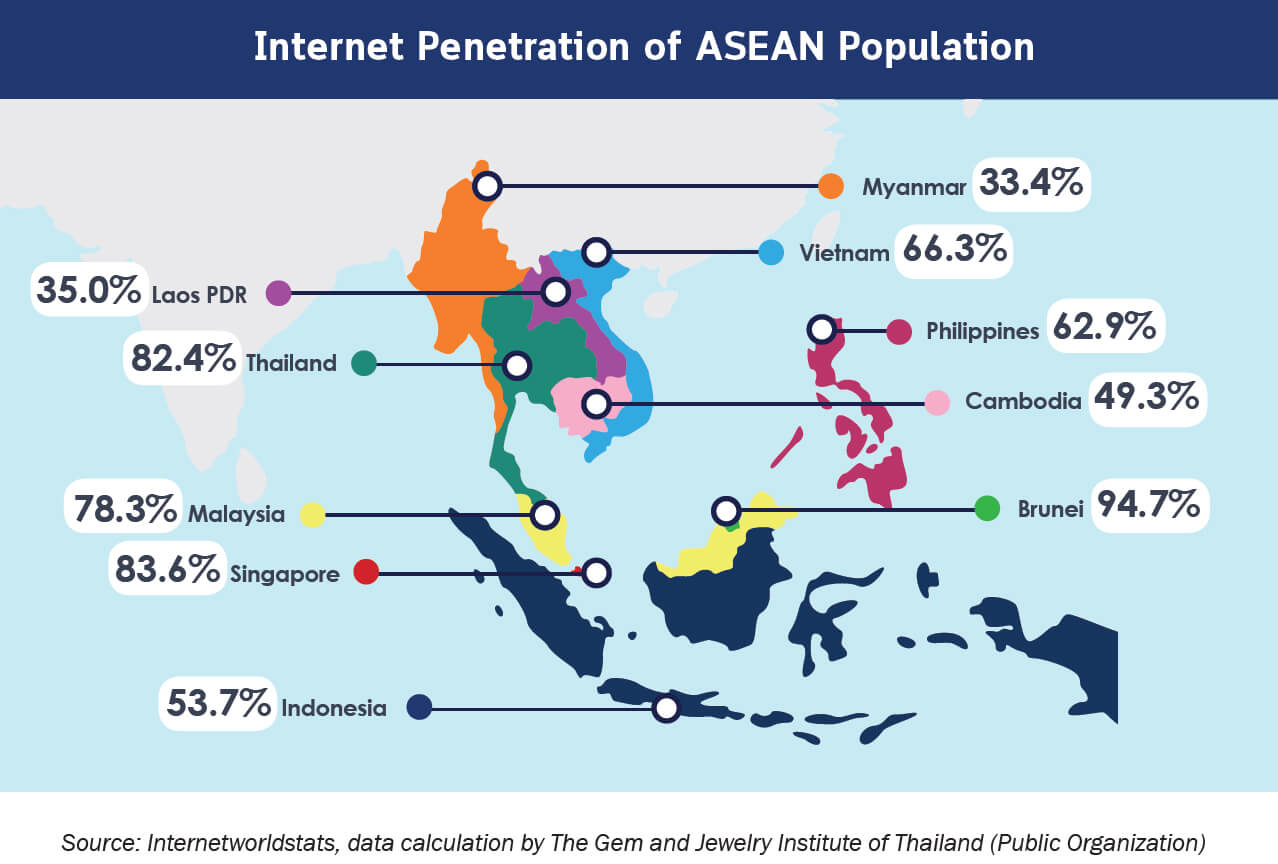 More than 300 million people in Southeast Asia don’t have internet access, although this number is shrinking fast. It presents a huge opportunity (and challenge) for companies seeking a slice of the pie.

ASEAN is still behind on infrastructure with lots of countries not having full internet coverage. Especially compared with nations such as Japan and South Korea, online connectivity in ASEAN is weak.

The only country in Southeast Asia which has strong online connectivity is Singapore. Research shows that over 26% of its population has fixed broadband connection while 100% has mobile.

In Vietnam, Philippines, and Indonesia, barely half of all people have access to mobile internet. Less than one-tenth have fixed broadband access in these frontier markets where consumers typically access the internet purely through their phones.

A trend to note is that mobile broadband access in ASEAN will be the key driver of e-commerce development. Businesses and governments throughout Southeast Asia realize this fact and are taking steps to develop mobile infrastructure.

One major barrier that stops brick and mortar firms from going online is that they’re unable to find qualified workers.

Lots of retail e-commerce platforms in Asia are easy to use – interface design isn’t the problem. Regardless, the workforce largely lacks knowledge about online transactions and related tech.

That’s especially true when talking about ASEAN’s small and medium sized businesses (SMEs) in frontier markets like Cambodia and Myanmar.

In addition to the above real challenges that now threaten e-commerce in ASEAN, here are two other perceived challenges as well.

Skepticism Over ASEAN’s Ability to Compete

SMEs in Asia lag behind the rest. During surveys, they said they’re able to take their businesses online. Yet they still won’t because they somehow think the costs outweigh the benefits.

Asian SMEs believe much of the hype around e-commerce is overrated. That’s despite research research concluding that Southeast Asian e-commerce players have as much as 41 times more traffic than brick and mortar shops.

Of course, the lack of competition is a good thing for established e-commerce firms in Asia. But governments should promote the perks of e-commerce to help solve a broader issue of public perception.

Customers and retailers alike are wary about any transactions done online in Southeast Asia. They’re simply more comfortable with the “traditional method” of handing over cash for every purchase. Because of this, many buyers are shying away from e-commerce.

Governments across Asia have already developed numerous rules to improve data protection, prevent cyber-crime, and encourage online purchases. However, this problem is caused more by a lack of information and public awareness than anything else.

In short: while ASEAN’s e-commerce sector lags far behind the rest of the world, they can still develop a prosperous online market. Private and public sectors must work together though.

They should, in a coordinated effort, help inform consumers and small businesses about the benefits that e-commerce can provide. Such perks include sales reach, scalability, and added convenience.

Southeast Asia must also become an easier place to do business, both as a local and foreign investor.