Recent years saw rapid development in the Philippines which is now among the world’s fastest growing markets.

The unemployment rate fell since 2010 with the last reported figure at 5.5% during the second quarter of 2017.

With that said, progress is slow and unstable. The Philippines has the highest unemployment rate in Asia.

Many factors are causing unemployment in the Philippines. But the a major reason is because their population is growing faster than the rate jobs are created.

During three of the past five years, official statistics showed the number of people entering the job market is greater than the number of new vacancies.

This conundrum highlights the difficulty and complexity of spreading economic benefits in the Philippines. While the nation’s capital of Manila prospers, wealth isn’t trickling down to poorer regions. 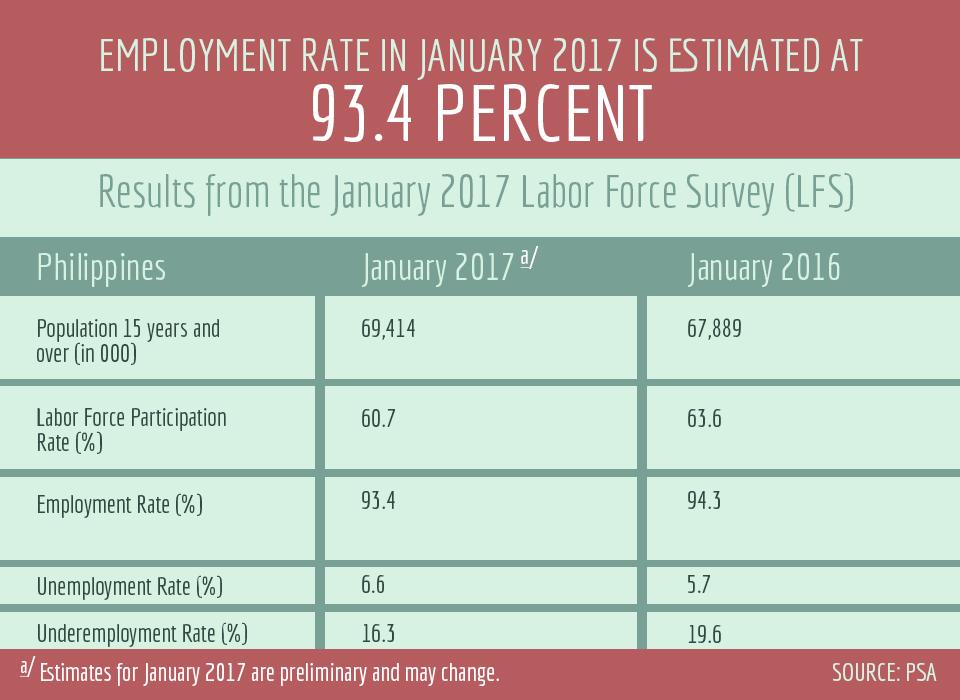 In addition to low employment figures, the Philippines also suffers from a weak labor participation rate along with high underemployment.

A second reason for high unemployment in the Philippines is even more alarming. Their labor participation rate is simply less when compared to neighboring countries.

Consequentially, that means productivity would still remain low even if employment rises at the same time.

Just about 65% of the population aged 15 and above is looking for work – among the lowest in Asia. Labor participation rates in Vietnam, Thailand, and Indonesia are respectively 78%, 72%, and 68%.

It’s not all bad news though. Higher value placed on education in the Philippines might also be a possible explanation.

Not Enough Good Jobs in the Philippines?

The last reason for unemployment in the Philippines could be the low quality of jobs available. In 2017, less than half of workers, both in formal and informal employment, were in paid jobs.

Out of the rest, approximately 25% are self-employed without guaranteed income. 10% more work in a family business and receive food/lodging but no cash, according to official statistics.

Former Budget Minister Benjamin Diokno says this large number of unpaid workers – around four million people – “bloat” the ranks of the employed. They make the unemployment rate in the Philippines seem less serious than it truly is.

However, unpaid workers certainly aren’t the only ones feeling held back. 18% of workers said they would like to work longer hours or get an extra job. Only 35% of these worked 40 hours or greater per week.

The Philippine government, in an effort to mirror the success of its Asian neighbors, wants to improve the quality of jobs available. They’re accomplishing that by aiding employment in the manufacturing sector.

But efforts have seen little success so far. They’re hindered by major issues like higher wages, limited infrastructure, and red tape, which make the country less competitive than its ASEAN peers in the manufacturing industry.

One out of every ten Filipinos works abroad, sending billions worth of remittances back home. Overseas Filipino workers (OFWs) transferred US$28 billion in 2017.

In turn, that helps support the nation’s consumption-driven economy. Although it does little to actually promote employment for workers who remain onshore.

There doesn’t seem to be an end to high unemployment in the Philippines. You might want to consider investing elsewhere if employment indicators are important to you.