Stocks are usually the first asset class that comes to mind when talking about “investments”.

They’re also the most common way for people to invest abroad. Global real estate and private equity are just too complicated for some buyers.

But frontier markets usually do not have stocks. These unexplored nations boast high returns, yet might not be developed enough to the point where they have a public equity market or the infrastructure required to host one.

That’s not necessarily a bad thing. In fact, it’s part of the appeal of investing in frontier markets. More opportunities exist in nations that haven’t been swarmed by capital from Goldman Sachs and other institutional investors.

With all that said, below are some frontier markets in Asia that do have stock exchanges. They may require you to hop on a plane and personally visit a branch to open a brokerage account. Determined investors benefit from barriers to entry though.

Positioned directly to China’s northern border, Mongolia is getting tons of investment from its much bigger neighbor.

Mongolia certainly isn’t a small country itself in terms of land size – it’s the world’s 18th largest. Yet having just over 3 million inhabitants gives it one of the lowest population densities on the planet.

Chinese investors have poured into Mongolia’s equity and real estate markets because of this fact, combined with its vast reserves of coal, tin, oil, and other natural resources. Beijing needs more of those things as they continuously deplete their own deposits. 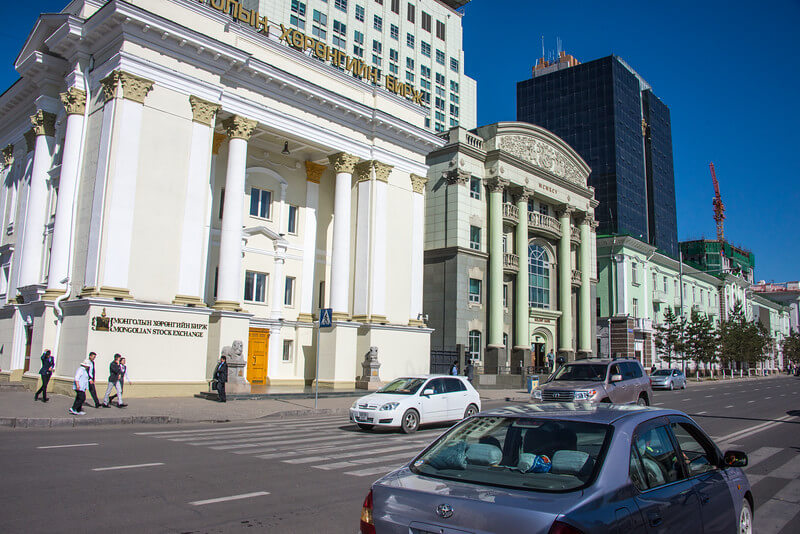 Out of all the frontier market stock exchanges in this article, Mongolia is likely the least correlated with assets in Europe and the Americas.

Easy access to hot money across the border is possibly why Mongolia has a fairly sizable stock exchange… at least for a frontier market. You can trade over 219 publicly listed companies on the Mongolia Stock Exchange (MSE) ranging across almost every sector.

Vietnam arguably isn’t even a frontier market anymore. All major ratings agencies still consider it one though, so we’re nonetheless including Vietnam on our list.

The Southeast Asian nation is unique because it has two different stock exchanges. Both its capital of Hanoi and largest city of Saigon each have an exchange with several hundred listed firms.

You’ll have to open a Vietnam brokerage account in order to trade stocks directly. If opening a local account is too inconvenient for you, some ETFs based in other countries focus exclusively on Vietnamese stocks.

A vast majority of these ETFs are listed on U.S. exchanges and include VanEck Vectors Vietnam. However, they aren’t the best way to buy stocks in Vietnam.

Instead, you should look towards small and mid-cap stocks. There are dozens of smaller firms in Vietnam that barely see analyst coverage. Lots of undiscovered gems are waiting for anyone willing to put forth the effort.

The bad news? You’ll need to visit Vietnam to open a local brokerage account and cannot do it from home.

Several frontier markets in Asia have stock exchanges which either haven’t found their footing yet or simply aren’t accessible to foreign buyers.

For example, Cambodia’s stock market has only five listed companies right now. Four of those are quasi-public corporations like Phnom Penh’s Water Supply Authority and the Sihanoukville Autonomous Port.

Neighboring Laos is in a similar position. The Lao Securities Exchange has five firms listed on it, including the nation’s largest bank and two property developers.

The Yangon Stock Exchange in Myanmar is the world’s smallest with just four listed companies. It’s also the newest stock exchange in Asia. But similar to the two exchanges mentioned above, a lack of liquidity and few available options are hindering its growth.