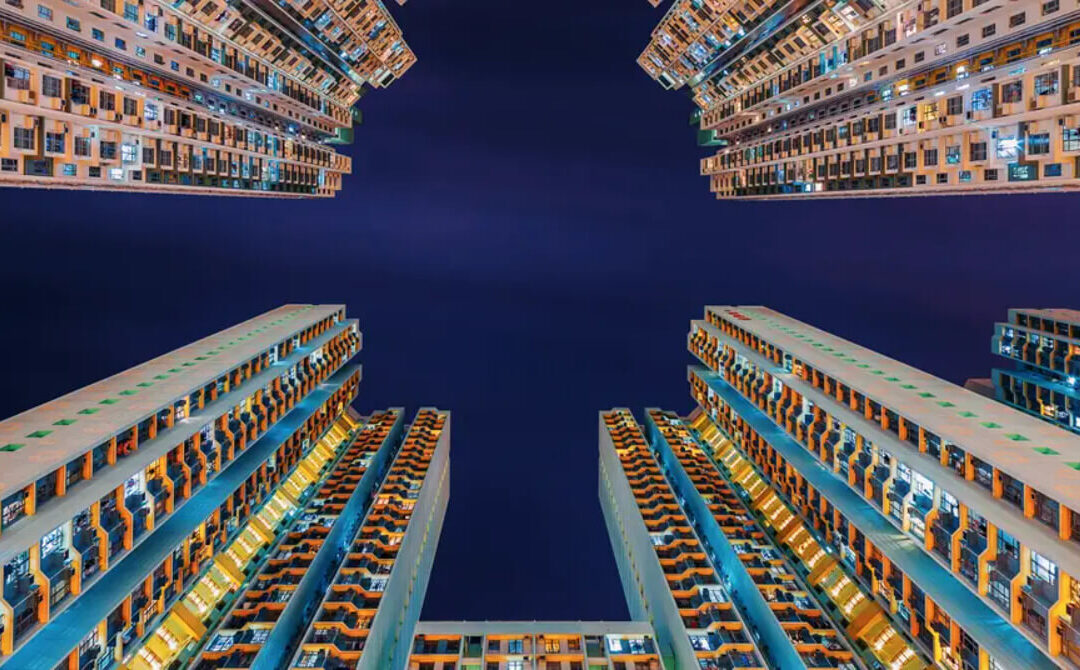 A metaphorically infinite number of dollars is chasing a limited number of goods. The result? INFLATION!

There’s no ignoring the elephant in the room – it’s gotten so large that there’s barely any room left. Open any financial newspaper and chances are you’ll likely see some article about inflation on the front page.

Investors are terrified as the good times are coming to a rapid end and everyone’s scrambling for the exits. But what exactly can you do to protect your wealth, and perhaps even increase it during these unstable times? What are the best ways to invest for inflation?

In this article, we will discuss why we’re in an era of increasing prices, what the top performing investments are during inflationary periods, and how to position yourself appropriately for this coming era.

Why We’re In This Mess

For years, the more conspiratorially minded economists have whispered about the possibility of inflation.

They posited that the money creation to stimulate the economy as a means of solving the Great Recession of 2008 would be unsustainable, despite the fact that it had created the longest bull-run in history.

Quantitative Easing, as the program came to be known, uses newly created money to purchase debt, thereby artificially propping up the economy with low-interest rates.

While controversial at first, QE is now the norm in most western countries, and it’s been argued that this has disrupted the natural ebb and flow of the markets.

It’s difficult to fully describe the extent to which this has affected the economy. Just in the United States, about US$60 billion in bonds are purchased per month through this means, and COVID support measures have also added a further US$11 trillion in circulation.

Over the last decade, the economy seemed to expand to support these new inflows and inflation rates were negligible.

These low inflation rates also created the Silicon Valley culture of businesses with no clear path to profitability but supported by investors in the hopes that one day these startups might capture large enough chunks of the market to enact monopolistic policies to reward investors.

Now, with the supply shocks and shift in consumer behavior towards the cautious side, investors are terrified. The era of easy growth and supporting unprofitable business models is over.

It’s clear many of these businesses will never become profitable and so investors are fleeing.

So then, where are your investments supposed to flee in an inflationary environment? 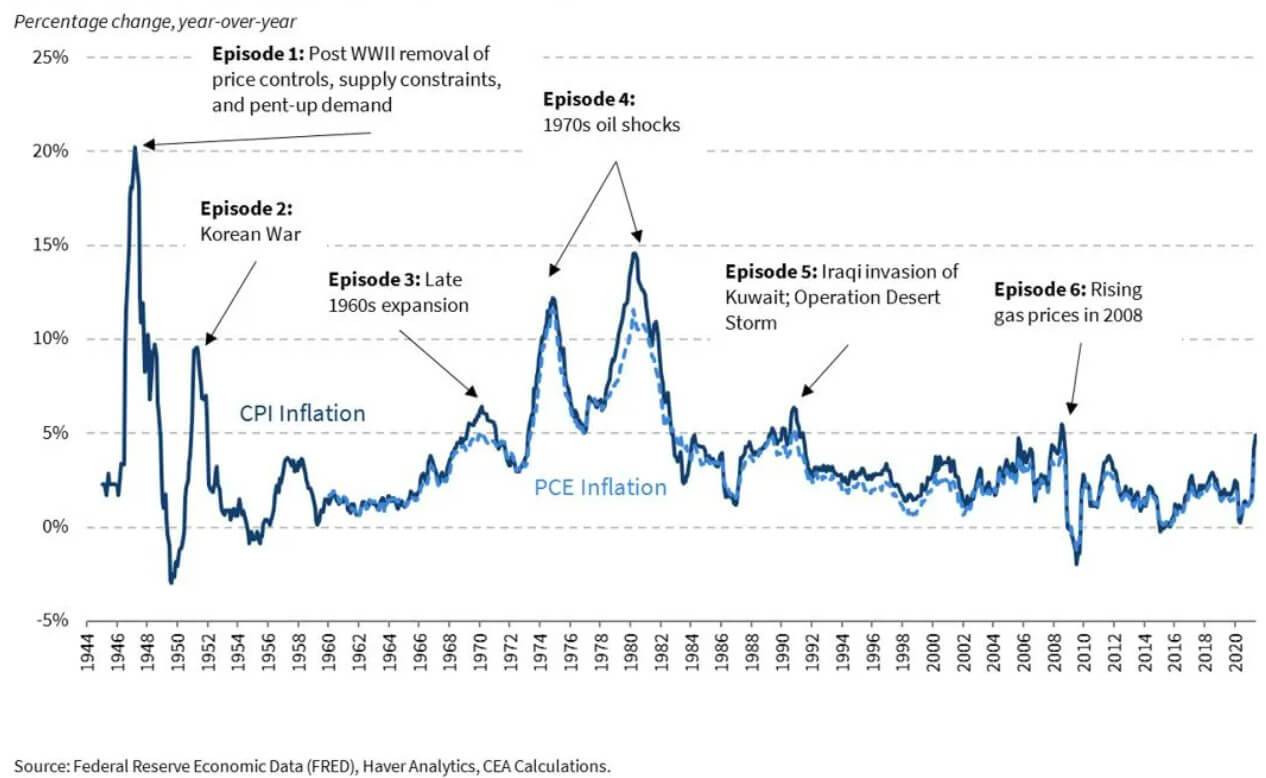 Here’s a chart showing US inflation rates over the past 70 years. 5% isn’t terribly high by historical standards. Note that stocks and real estate performed well during periods of high inflation.

If we were to make a list of the best performing investments during an era of high inflation, they would often have the following characteristics:

Once we consider these three aspects, it’s easy to understand why certain assets are often mentioned when people talk about inflation.

Frankly, we’re hesitant to actively recommend this category with any degree of seriousness.

Not only are these assets financially inert, in that they don’t produce a cash flow, but they’re often difficult to resell. Worse still, they’re subject to fashion trends and can thus wildly fluctuate in value irrespective of the macroeconomic conditions.

So, while there are examples one can point to where this asset class did particularly well in an inflationary environment, they might be subject to survivor bias.

It’s often been argued that crypto is a hedge against inflation. But this is a somewhat spurious argument that omits considerable information.

Yes, cryptocurrencies like Bitcoin have done rather well over the last decade when compared to a Dollar denominated savings account. As a relatively new asset class, there’s no historical precedent for Bitcoin’s performance in an inflationary environment though.

Holding bitcoin during periods of high inflation might work out for you. Yet unlike other investments on our list, it’s completely untested.

The fact that crypto coins are limited in number isn’t necessarily a guarantee of a perpetual upwards trajectory either.

Furthermore, the price of these assets is known to go down by 80% even during positive macroeconomic times. We’ve haven’t ever seen what happens to them in a prolonged global market downturn. There’s no such thing as a “global inflation rate”, and it varies depending on the country. For example, the inflation rate in Thailand is currently 3.2%. A condo in Bangkok, like the one above, might be less resilient compared to property in your home market.

In economic history, there has usually been a constant: sooner or later, gold will match the pace of inflation. The price of gold might be up, or it might go down, but over a long enough time span, its value keeps in line with inflation.

The same can’t be said about other commodities. For example, aluminum used to be considered an expensive luxury, to the point that aristocrats would showcase their aluminum cutlery in banquets.

Yet, the new production methods of the Industrial revolution made it so cheap that we now wrap sandwiches in it.

More broadly though, commodity producers via publicly traded stocks tend to be better assets to invest for inflation. For example, don’t invest in gold, but in gold miners.

In an inflationary environment, it might work for the best: their labor costs are fairly fixed, but the price of their goods is constantly going up.

As such, perversely, their profit margins might increase when there’s high inflation. So, you can benefit from the soaring prices of commodities, while still having a cash-flow-producing asset.

The last and perhaps most obvious asset on this list. Real Estate and land tend to do rather well in inflationary periods, or at the very least keep in line with inflation.

There are many ways in which you can do this. You can buy property directly, though that might carry with it some administrative obligations, like taxes and other surcharges.

Besides that, there is the option of investing in property via REITs, which pool investor funds to purchase dozens or hundreds of properties. As such, you can be very well diversified but still have a property-centric outlook.

It’s worth mentioning that REITs and property funds are generally quite good from a cash flow standpoint, as legally they are required to give most of their profits as dividends.

Whichever option you choose though, bear in mind that you’re not chained to the country in which you’re currently residing.

For example, Cambodia completely sidestepped the 2008 Great Recession. If you were deriving income from Cambodian property, you would not have felt the Great Recession of 2008.

Asia is often countercyclical to Western economic policies. International assets, depending on where you’re buying, can be great places to invest for inflation.

Generally speaking, these are the broad asset classes that people tend to recommend in inflationary environments. None of them is devoid of problems, but some are objectively better than others.

However, now that we’ve looked at where you can preserve your wealth, let’s look at how the financial scene changes when there is high inflation.

If we look at the historical record, high inflation often leads to economic collapse. It’s easy to see why, as high inflation is a sign that people have lost trust in the underlying value of their currency.

This, by extension, means that people lose faith in everything associated with it, including perfectly good companies and assets.

When things get bad enough, people want to flee, and they’ll sell to whoever will take their investments off their hands, even if it’s at ridiculously low prices. It’s important not to lose one’s head along with the crowd during the period of collapse.

Don’t sell in a panic, this is normal. But once this happens, you’ll have to stay put for a few years. It’s happened before.

In 1922, during the era of hyperinflation in Weimar Germany, there was a case where an automobile factory in perfect order cost less than the price of 227 cars they’d previously produced. By 1927, less than five years later, this price had quadrupled from its lows.

The trick in high inflationary environments is to prepare beforehand and commit to a course of action, don’t pussyfoot around. Lack of confidence at any point may destroy you in the long term by realizing losses or having your capital eaten away by inflation.

It bears mentioning though that it is possible to use inflation to your advantage. If you have fixed-rate debt, as in loans that can’t adjust their interest rates to match inflation, then you’re in luck.

In real terms, you might end up paying far less than what the original loan was earmarked for.

Prepare to Invest for Inflation

Contrary to what the politicians have been saying, inflation is not transitory and at least for the foreseeable future, it’s here to stay.

It’s unclear how it will ultimately express itself, but there are some steps that you can take today to protect yourself from the ravages of high inflation. Generally speaking, don’t try to chase the dragon of high earnings.

In volatile times, it pays to be more conservative and go with less speculative investments. Money-makers of previous eras, like tech stocks, are reliant on a world of low-interest rates – a world that is rapidly coming to an end.

If you want to thrive, then you must be adaptable but confident enough to follow your plans without being spooked when there is volatility in the markets.

To summarize, here’s how to invest for inflation:

Put your money in scarce assets that will be desirable regardless of present or future circumstances, and are ideally away from the impacted area.