We recently posted an article about the most expensive cities in Asia for property. I figure that writing about Asia’s cheapest places to buy real estate, along with the reasons for their prices, is a natural follow-up piece.

I don’t recommend buying real estate (or any other asset) just because it’s inexpensive. Values are sometimes low for a reason – weak future prospects among other factors can reduce real estate prices in the present.

The opposite is also true. Just because a market is expensive doesn’t mean it cannot grow. For example, an apartment in Singapore costs around half the price of a similar unit in Hong Kong.

Both cities are leading financial centers while Singapore has an even higher standard of living.

As such, there’s a good argument that Singapore real estate is a solid deal… despite costing an absurdly high US$17,000 per square meter (about US$1,700 per square foot) on average.

The best strategy is to focus on overall value. Ask yourself if rental yields are high enough and whether there’s potential for appreciation. Don’t bargain hunt for the sake of it.

With all of that said, some property markets enjoy a rare combination of fair prices and great value. Let’s find out what Asia’s cheapest places to buy real estate can offer you as an investor.

The Philippines is the third least expensive country for property investors. Purchasing a condo in Manila will set you back by approximately US$3,000 per square meter.

Home prices in the archipelago have gone through a bull run for the past several years, more than doubling since the turn of the decade. Few bargains are left though. Current values are way beyond the level where locals can afford them.

Not only that, but the market is overvalued compared to others in the region too. For example, buying a condo in Bangkok will cost you barely several hundred dollars more per square meter on average. This is despite Thai income levels being more than triple those in the Philippines.

You only need to look at the second country on our list for an even more developed, and lower priced market.

But we probably won’t see a collapse in the Philippines. That’s because the Philippine economy is still among the fastest growing in the entire Southeast Asia region, climbing by an impressive 6.7% in 2018.

Foreign investors, especially buyers from China and India, should soak up any excess supply in the meantime.

Either way, the Philippine real estate market (or at the very least Manila’s) should have modest growth ahead. This is one case where comparatively low prices don’t equal a great bargain.

Property in Malaysia’s capital of Kuala Lumpur costs only about US$2000 per square meter on average. This is despite Malaysia ranking among Southeast Asia’s richest nations – third next to Brunei and Singapore, in fact.

Why? Quite simply, Kuala Lumpur went through its construction boom and suffers from far too much inventory now. Rental yields are also horrendous at around 3%, therefore nobody wants to be a landlord in Malaysia. It’s just too much effort and cost for not enough reward. 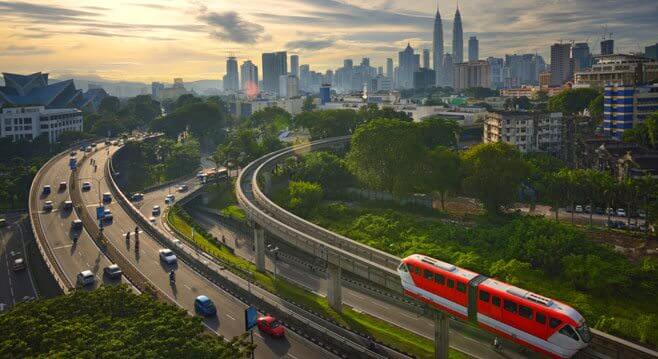 KL has an impressive skyline. However, not enough Malaysians can afford a shiny new condo unit.

Not only that, but Malaysia’s Ringgit is now one of Asia’s worst performing currencies. Lower commodity prices and weak exports led the currency to reach its lowest level since the 1980s. This means buying property in Malaysia is now cheaper in terms of most foreign currencies.

Malaysia’s long-term outlook is better though. Strong population growth will help this relatively small nation of 30 million people reach 40 million before 2040. All this, alongside urbanization and rising purchasing power, will inevitably lead to greater demand for prime real estate.

Do you mind waiting awhile for property prices and rental yields to increase? That’s a personal investment decision. But Malaysia’s demographics show they almost certainly will in time.

Cambodia is the least expensive country to purchase real estate as a foreigner in Asia. It costs just under US$1000 per square meter to buy prime residential property in the nation’s capital of Phnom Penh.

Mind you, we aren’t talking about new high-rise condominiums in Phnom Penh. Expat-targeted info about real estate in Cambodia focuses on such condos. But they’re often expensive, suffer from high vacancy rates, aren’t popular among locals, and have little resale value.

Older shop-house apartments built during Cambodia’s colonial era are some of the best deals in the region though. Their quality can range from fit-it-ups, to 5-star standards and luxurious fittings.

These apartments might be a few decades old. Yet they’re well-built and boast a desirable location in Phnom Penh’s financial centre.

Why is Cambodia so inexpensive? Unlike Malaysia, for example, there’s no mismatch between supply and demand. Buying real estate in Cambodia is cheap simply because the nation is one of Asia’s least developed.

It might not be the case for long though. With economic growth exceeding 7% per year (which is only expected to hasten from there) Cambodia is also one of the fastest growing nations on the planet.

Tourist arrivals, foreign investment, and exports are all on the upswing and often growing by numbers in the double-digit percentage range each year.

Meanwhile, foreign real estate investors in Cambodia can benefit from yields in the 7% to 10% range. That’s a pretty good incentive to wait.