Why Thailand’s Baht is the Best Currency in Asia

Currencies around the world have depreciated against the U.S. Dollar for the past few years. It hasn’t been limited to a few different countries or regions either.

The pound, euro, rupee, yuan, and just about every other currency is trading significantly lower against the greenback compared to earlier this decade.

Not a single currency in Asia has been completely safe from the trend. But one has surprisingly done better than most, if not all of its peers: Thailand’s Baht.

Even the Singapore dollar, which many financial experts consider Asia’s best currency, has not  been nearly as stable as the Thai baht.

The yen, won, and practically all other Asian currencies have recently fluctuated within a wider range against the U.S. Dollar too. 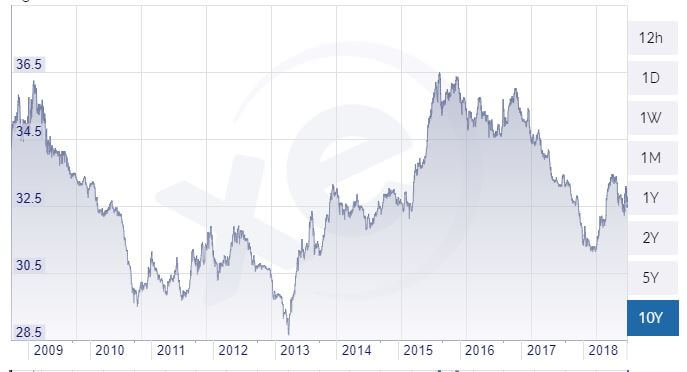 For the past decade, the Thai Baht (THB) has fluctuated within a narrow range against the USD. It’s a stark contrast to most other Southeast Asian currencies which have steadily depreciated.

The Thai Baht hasn’t always been a robust currency. It was one of the world’s worst performing during the 1997 Asian Financial Crisis. It didn’t fare too well in the more recent global recession either.

However, the Baht has arguably been the top currency in Asia for several years. That’s because of reasons which include a strong tourism sector, weak export numbers, and a lack of reliance on oil or other commodities.

More than 32 million tourists visited Thailand back in 2016. Its capital of Bangkok was (and still is) the single most visited city in the world, beating out Paris and London. This influx of foreign money getting exchanged into Thai baht helps prop it up.

Thai exports have been rather weak lately. But while the nation’s GDP is rising slower than its neighbors, a relative lack of reliance on trade has kept the baht strong.

You can’t say the same about places like Malaysia. Thailand’s southern neighbor is extremely dependent on oil exports. Low crude prices have, at least in part, caused the Malaysian ringgit to suffer as one of Asia’s worst currencies.

Plus, countries such as Thailand aren’t going through massive amounts of QE like Japan now is.

How Will the Thai Baht Perform in the Future?

None of this necessarily means that you should buy the Thai baht right now. Past performance doesn’t guarantee future results. And the baht’s history is less impressive when looking at a 10 or 20 year timeframe.

The point still remains: the best currency to invest in isn’t always the most popular one. Nor is it usually the one perceived as “safe” by everyone else.

Over the past few decades, some investors bought up Singapore dollars due to the city state’s reputation of stability. Others bought Japanese Yen to diversify their wealth – without knowing what they’re diversifying into.

Just because you’re investing offshore doesn’t mean you’re any safer. Diversification won’t help you much if it isn’t done in the right places.

As for the Thai Baht? It’s steadily rising against the U.S. Dollar along with most other top-traded global currencies for the time being.

Its future movement will surely depend on the actions of other countries. Yet that would be an entirely different article.