India vs. China: Which Will Grow Faster? India and China, the two most populous nations on the planet, are very similar in some ways.

They’re both emerging markets with high growth rates usually exceeding 6%. Up until the late 1800s, India and China were also the world’s two biggest economies. Places like Japan and the United States only surpassed them within the last century.

Yet when it comes to economic development, China and India are a world apart.

China’s economy jolted forward since their reform policies during the 1980s and 1990s. A main reason is because privatization of state-owned businesses created huge amounts of wealth, all while foreign investors rushed to take advantage of China’s imminent rise.

Meanwhile, India lagged behind over the past several decades. Rampant corruption, seemingly endless bureaucracy, inept politicians, lack of a clear legal structure, and other challenges held the country back… and still do.

China’s GDP growth in 2017 was 6.9%, the slowest pace in nearly 30 years. It represents a new trend of slower growth which worries investors and businesses alike.

Even Beijing has shown public concern. That’s something notable for the Chinese government which is often secretive about large problems.

Perhaps the most important issue in China is corruption. Senior officials in Beijing have vowed to tackle corruption while some of the largest companies in China, such as Sinopec, have been publicly called out and told to clean up their act.

In particular, Premier Li is showing the fight against corruption is among his government’s top focuses. He says China will show “zero-tolerance” for corrupt executives and communist party officials regardless of “how senior their position is”.

The Chinese economy loses an estimated US$100 billion every year because of corruption. 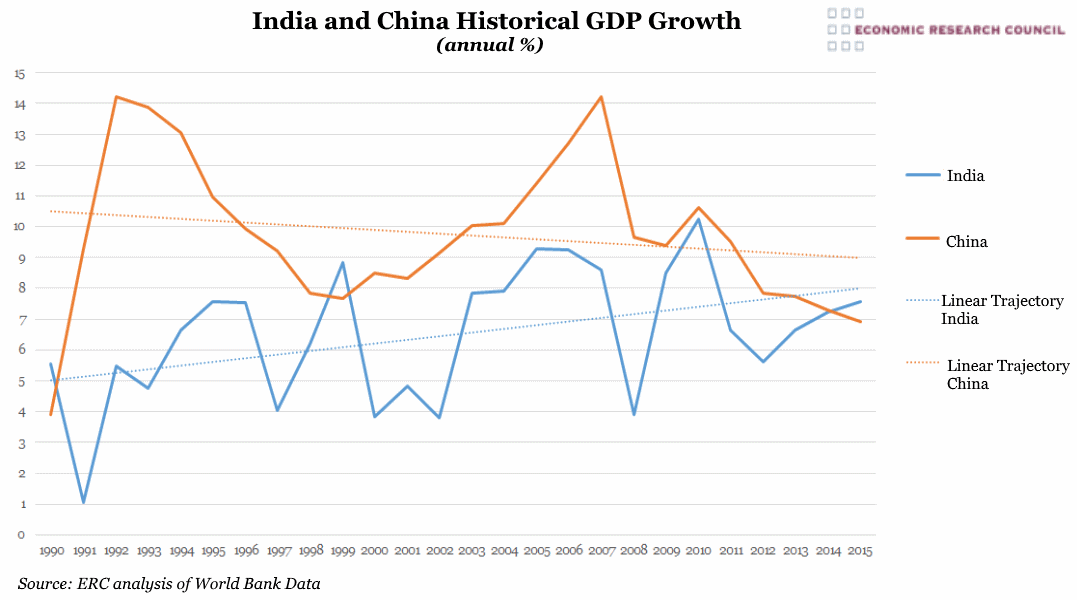 A graph showing India’s historical GDP growth versus China’s. Until lately, the difference between their economies was obvious.

The 21st Century: The Indian Century?

Thankfully, India’s economy is now picking up steam and could have the ability to drive global growth well into the future.

Foreign investors only recently started having a positive outlook towards the Indian economy. Prime Minister Narendra Modi was elected in 2014 and initiated measures aimed at increasing competitiveness, improving infrastructure, and making life easier for businessmen.

Arguably, reforms such as these will make all the difference. China supports entrepreneurship, mandatory education, and international investment for several decades. India consistently lags behind though.

High-tax rates, bureaucracy, and lack of government support for SMEs stifles wealth creation in India. Similarly, public schooling is notoriously bad while education is not mandatory. This has led to an uneducated workforce and a literacy rate of just 74%.

In short, leadership determined to spearhead much needed policies is what China had during the late 80s and early 90s, but is something India only enjoyed since 2014.

Now that India has a seemingly committed government, the future looks bright for the world’s largest democracy.

India vs. China: Which is Better to Invest In?

While China may be facing a “slowdown”, they were still among 2018’s best emerging markets in terms of growth. The country’s long term prospects remain positive.

From 1979 until 2010, the average GDP growth rate in China was 9.9%. No one should expect numbers in the upper single digits and lower double digits anymore. But most nations would give almost anything for even growth numbers between 6% and 7%.

Likewise, India is attractive to companies and investors due to reasons we already explained.

It’s hard to determine whether Chinese stocks or their Indian counterparts will perform better over the short, medium, or long-term. We recommend that investors have sufficient exposure to each market within an already diversified portfolio.

Why should there be an “India vs. China” when you can easily invest in both?