Want to Invest in Laos? Here’s Why You Shouldn’t

Laos is one of the fastest growing countries in Asia. Strong exports and its burgeoning service sector helped the Lao economy surge by 6.6% in 2018. The Asian Development Bank predicts even faster GDP growth of 6.9% going forward into 2019 and 2020.

Meanwhile, foreign investment is surging into Laos – especially from its much bigger neighbor.

China is pouring massive amounts of capital into Asia’s emerging economies through its One Belt One Road initiative. And Laos is among the main beneficiaries of China’s pet project.

The fact that Laos shares land borders with five other nations, including China, gives them the potential to become a transport hub for the entire ASEAN region.

A major example is the high speed rail line being financed by China. It will go through Laos and into Southeast Asia, leading to even more trade in the future.

Strong historical performance, and possibly even better days predicted ahead, might make you consider investing in Laos.

You probably shouldn’t buy property, stocks, or any other asset in Laos though. Here are a few reasons why.

Investing in Laos as Foreigner is Hard

Despite a rapidly growing Lao economy, it’s rather difficult for investors to bring money in and buy property or stocks. Markets don’t mean anything if you can’t access and profit from them.

Every plot of land in Laos is technically owned by the state. Foreigners can only lease land for a period of up to 30 years. Strangely enough, you can own houses and other types of real estate in Laos – yet not the land your property is built on.

Do you really want to buy a home when it’s at the mercy of someone else’s land though?

Similar to other frontier markets, Laos just barely has a stock exchange. You can trade exactly seven companies on the Lao Securities Exchange. Most of them are quasi-public corporations like the state-owned oil firm and the electricity provider.

This means starting a business is the sole practical method of investing in Laos as a foreigner. You don’t have many options left in a country that bars foreign ownership and doesn’t have a stock market.

So what’s the problem with that? Well, doing business in Laos is very difficult too. Forming and maintaining a company is a bureaucratic nightmare. On top of that, getting a long-term visa to actually live in Laos and run your company is a complete headache.

Quite simply, while nearby countries are among the easiest places in the world to invest, Laos is one of the hardest.

Laos is a Landlocked Country

Geography isn’t something that anyone can change. Yet a nation’s place on the map absolutely defines how easily it can grow. Having natural resources, access to sea routes, and arable land are all factors that help sustain economic growth over the long-term.

Laos is surrounded by five other nations. Having borders with as many countries as possible is generally positive for exports. However, in the case of Laos, it’s at the expense of having access to the sea. 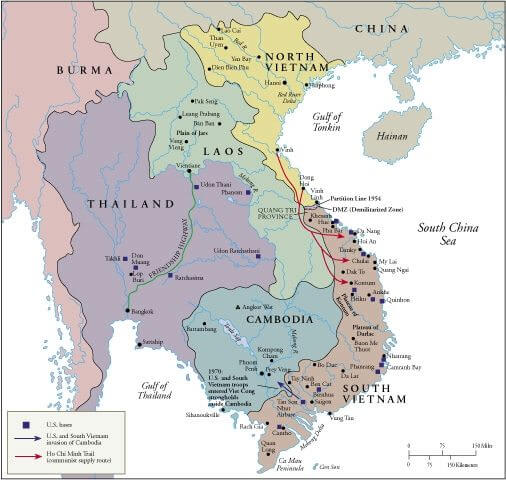 Life isn’t fair. But Laos is at an inherent disadvantage because of its position on the map.

Being landlocked means Laos will always have a hard time selling their products to the world. They can’t ship by themselves. Laos will always be dependent on its neighbors that border the ocean like Thailand and Vietnam.

Not only is that inconvenient for Laos, but costly as well. Lao products being exported through Thai ports, for example, are subject to Thai tariffs. Lao industry is noncompetitive and will face numerous developmental challenges.

Furthermore, Laos itself is difficult to maneuver. Approximately 70% of the country is made up of mountain ranges and highlands while dozens of rivers run throughout its territory.

This is also costly and inconvenient. Taxpayers must their spend money on infrastructure like bridges and tunnels to merely get across the country. Laos doesn’t have the luxury of building long roads across a flat plain.

As a result, infrastructure in Laos has a higher cost and will likely stay below global standards for a while. That issue is compounded by several other factors in this article (most of them self-imposed) and will deter those wanting to invest in Lao stocks, real estate, or companies.

Laos could potentially turn its location from a negative aspect into a positive one in the future. A rail system could eventually move products between China and Southeast Asia since Laos is otherwise centrally located.

Of course, that requires tons of effort, money, time, and cooperation with bordering countries.

You Have Better Investment Options

Nothing stated above means you can’t make a profit in Laos. In fact, lots of multinational firms. are doing very well here. Many of them are big companies from places like Vietnam and China, but plenty of smaller firms have found success too.

With that said, there are better options right next door to Laos. Vietnam’s stock market is fully functional and doing business is much easier. Meanwhile, Cambodia allows foreign real estate ownership and almost anyone can get a long-term visa.

There’s no reason to burden yourself with paperwork, stress, and bureaucracy when markets like Cambodia and Vietnam are right next door. Both are growing at around the same pace as Laos, yet they have far less of the negative aspects.

We’re talking about the most dynamic continent in the world. If you’re investing in Asia, do it correctly. Don’t sell yourself short.